Delivering the world’s largest Ceremonies Communication system for the Baku European Games this June, were Sydney’s The P.A. People. “…They have highly trained and knowledgeable personnel who know exactly how to get the most out of the systems” said Bob Boster, President of Clear-Com. 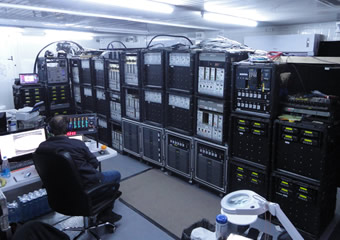 In the run-up to Baku, The P.A. People won the contract to provide ceremonies comms, providing two-way radio, intercom, CCTV and technical services. For the Ceremony proceedings, The P.A. People selected Clear-Com intercom systems to handle production communications during both rehearsal and both Ceremonies.

“The scale of the project was pretty remarkable,” says Chris Dodds, managing director of The P.A. People. “In many ways it was a bigger undertaking than Sochi. The other particularly notable aspect of the project was the use of the Clear-Com FreeSpeak II [DECT-based wireless communications] system to cater to the Moving Stage. The production crew did not include full duplex on the original specification, but as the artistic component of the event developed – and after we had been appointed as contractor – it was determined that a full duplex solution would constitute a significant advantage for the Ceremonies.”

Ultimately, the call was for a capacity of 80-plus packs to be put in place. With 50 or so packs generally constituting the maximum for a single-location FreeSpeak II deployment, The P.A. People designed a configuration “…using two systems in two different frequency bands, and with the support of the Azerbaijani authorities we were able to operate one system in one local license band and the other outside of that. With the two systems co-located, we could achieve the desired 80 packs in one physical RF space to the satisfaction of all. It was a great achievement” said Chris.

Chris Dodds reports a “highly positive” response to the performance of the comms systems on the night, whilst Bob Boster, President of Clear-Com – which provided two support engineers on the ground – reports “another in a long line of great collaborations with The P.A. People. We really have a great partnership with them. They have highly trained and knowledgeable personnel who know exactly how to get the most out of the systems – as the deployment at Baku demonstrates.”

In other news for Event Communications product innovation:

The P.A. People adds FreeSpeak II to their inventory
…“This system will provide our large scale event and corporate customers a great sounding full duplex solution they can actually rely upon“ said Chris Dodds MD – The P.A. People.

FreeSpeak II is the second generation full duplex communications platform from Clear-Com.  It is a cellular system that delivers on the promise of extending the functionality of a keystation to a wireless platform. The P.A People utilising the FreeSpeak II system in its first outing in Baku, was also acclaimed as a triumph by Five Currents Senior Technical Director, Nick Eltis.  “The FreeSpeak on the revolve is excellent. It is working perfectly. I am really impressed with FreeSpeak, everyone is really happy with it. “

…“We foresee significant demand for the iOS app in the Corporate space as well as for larger events” said Travis Henry, Manager Event Communications – The P.A. People. “Now event executives on the move can have access to their intercom system from the device in their pocket, or simply maintain contact when they are on a break.  It will mean a whole new level of connectivity and use of the ‘comms system.”

The P.A. People (Sydney Australia) are pleased to announce the upgrade of their entire Clear-Com Eclipse Matrix rental fleet to Clear-Com’s latest software release, Eclipse HX V8.5. Along with the addition of over fifty V-Station Rotary panels in a mix of 12 key and 24 key variants, the Company can now also offer its customers the use of the new Clear-Com IC Agent iPhone app, which for the first time can provide direct remote access to a matrix system from a iPhone or iPad over a wireless network connection.

The diversity of our technology provides the right solution, regardless of the complexity.