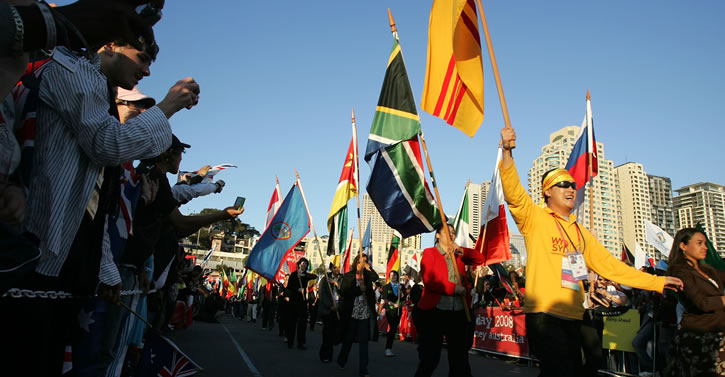 The P.A. People provided IP based CCTV systems for both the Barangaroo and Randwick Racecourse sites. Our EYEcue packages consist of rack mounted servers running Sony Real Shot Manager software, up to 10TB of network attached storage for recording, and over twenty five IP cameras.

The package was rounded out with 17” and 20” iMac workstations with USB Joysticks for client camera control and access.
We also provided two long range cameras, each featuring a ½” CCD camera coupled to a specially sourced 500mm lens. One of these long range cameras was located on Optus Tower in North Sydney overlooking the harbour and then linked back to both Barangaroo and Randwick via 5GHz RF links, enabling stage management to ‘see’ the approach of the Papal ‘boatacade’, while the other provided close up views of the stage over a distance of 700m.

The P.A. People WYD activities also included the provision of television monitors for the huge contingent of national and international media at the two main venues.

Over 280 TV’s were deployed over the two sites along with a multichannel MATV distribution system.

The P.A. People deployed thirty four FM services across five transmit sites around the Sydney CBD. A 1kW city wide service located in North Sydney was the main English language service covering the entire CBD and surrounding areas, while four low power sites each with eight 5w or 25w transmitters were provided around the city venues and at Randwick for multilingual translation services.

Each channel of transmitter was provided with pre-recorded native language voice idents to facilitate the pilgrims finding the correct frequency. 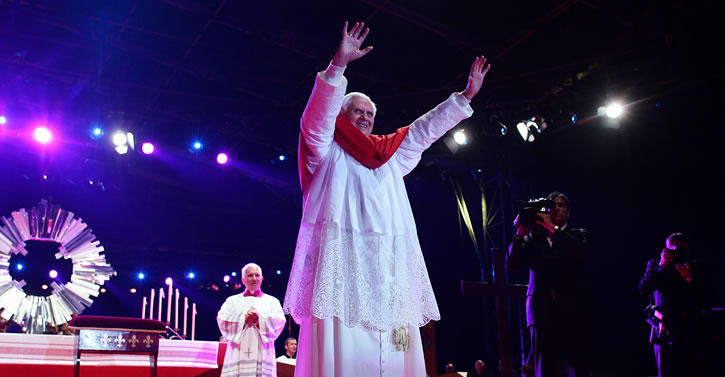 In conjunction with Vertel, The P.A. People provided a trunked city wide two way radio system with over 140 users to support the work of St John Ambulance Service.

The P.A. People provided all audio and video services for the seven Papal Events that were held in the secure St Mary’s Cathedral precinct, including the televised Dedication of the Altar Mass, meetings with Church Leaders and the Leaders of Other Faiths.