“The Biggest Pop-Up Event in Australia!”

The P.A. People is not a stranger to large sporting events, counting the Olympics, Commonwealth Games and the FIFA World Cup as clients. But there’s something special about the Formula 1® Australian Grand Prix. As Andrew Westacott, CEO of the Australian Grand Prix Corporation declared during a contractors’ thankyou breakfast held on site prior to the 2014 event, “it’s pretty trendy these days to talk about pop up events in restaurants and the like, but you guys are all involved in setting up the biggest pop up event in Australia!”

The logistics and requirements supporting an event such as this are mind blowing and the rollout of what is probably one of the largest “pop up” distributed audio systems for an event such as the Formula 1® Australian Grand Prix is an undertaking that needs to happen with all the precision and timing of a military operation.

“We have a great team of people on site that have been involved with the event since we were awarded the contract 4 years ago. Having a consistent team, who completely understand the nature of the event, and particularly understand the high expectations of quality that come with the Formula 1® Australian Grand Prix brand, is key to delivering a successful result each and every year”.Matt Kirby – Manager of Event Communications with The P.A. People

Planning in the lead up to the event commences months in advance with the company’s on-site activities commencing four weeks out from race day. Des Williamson, Project Manager for The P.A. People explains; “our involvement with the Formula 1® Australian Grand Prix event not only includes the distributed audio system, but we also provide numerous smaller PA systems for the corporate stands, press conferences and localised entertainment activities that occur around the Formula 1® Australian Grand Prix site. We also provide the audio system that supports the anthem singing and presentations on Pit Lane as well as a 12 screen video-wall system that is installed within race control; this allows all race officials to monitor the track in real-time during the Race. To assist us in our operations we set-up a fully fitted-out compound, complete with office, lunchroom and equipment storage areas and this forms the base of our operations on site” said Des.

One of the biggest jobs for The P.A. People is the deployment and maintenance of almost 450 speakers fitted to the race barriers around the entire 5.3km circuit. As these barriers can sometimes suffer a vehicle impact, some simple engineering has gone into keeping the system functioning. “Every second speaker is on a separate circuit so, in the case of impact rather than losing an entire circuit, chances are one of the two cables will remain intact” explained Paul Barrett – Project Engineer for The P.A. People. “That way, we can keep the P.A up and running and spread the load over multiple amp channels whilst we fix any issues caused by an impact to the barrier” said Paul.

Campbell Waller, Installation Manager – Track PA, is in charge of the rollout and pack-down of the entire speaker system and its cabling. One of the lessons The P.A. People learned about vehicle impacts earlier on, was to make their equipment give rather than break. “We were using installation ties for the cabling, but we found that if a car hit a section, they were too strong and didn’t break as easily” relayed Campbell. “We changed the fixing method and with a couple of big incidents into the wall (since then) this means we haven’t had to repair anything.” 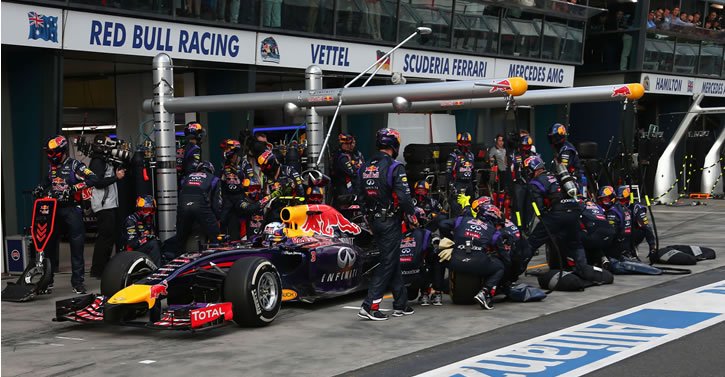 Campbell takes just as much care of the speaker cabling, which, at 28 kilometres worth, represents a massive investment of time and money. “One of our strengths is that we’ve got an installation as well as an events background. You’ve got to manage this equipment to last for four weeks with all the other trades working over the top of you. If you just ‘throw it on the ground’, it’ll be fast to install, but it won’t be reliable. We treat this more like a permanent installation and in the past four years, we haven’t had a single track PA fault that’s been related to our infrastructure.”

The speakers are powered by seven amplifier locations around the track in custom designed ‘huts’; portable structures purpose built to house track equipment racks. There is full redundancy in the system and each hut contains a rack fitted with UPS, amplifiers, network audio bridges and FM tuner backup that can be activated in the unlikely event of a failure to the main system.

Signal distribution to the huts is achieved via the use of the AGPC’s fibre optic network that surrounds the track. It’s a rare example of a converged network working harmoniously and efficiently to fulfil all technical needs.

All audio distribution is via the network. A Peavey MediaMatrix forms the heart of our operations in the Main Compound.  It directs audio traffic to and from other MediaMatrix nodes in seven amplifier huts around the track, as well as interfacing with Yamaha LS9 digital mixers in the Formula 1® Australian Grand Prix Press and National Press Centres. Other network pick-up and drop off points include the National Media Tent, Camera positions, The Action Zone and the V8 Supercars area.

Paul Barrett, Project Engineer, Grand Prix – for The P.A. People, is responsible for all networked audio. “It would be challenging to an event like the GP without using networked DSP” said Paul. “We can pre-build all of the audio routing and intelligence into the system. The MediaMatrix rack is then dropped into our operations room in the Main Compound and it’s all up and running pretty painlessly.”

The main pit building is home to Race Control, where Formula 1® Australian Grand Prix officials, safety and medical staff monitor every section of the track to ensure a smooth event. A huge video-wall provided by The P.A People dominates the control room, with cameras covering every inch of the track. “It’s a requirement from Formula 1® Australian Grand Prix that we run all of this on UPS’s with a minimum of two hours run time” explained Paul. “And that’s for the building services, the video-wall, computers and communications at Race Control. If any of this goes down, the race stops” he said.

The critical UPS’s are patched in-line via changeover switches in The P.A. People Operations Room. All of the Main Compound’s electrical wiring is routed through the switches, with a UPS inserted to run most services. Apart from the all-important Race Control, other critical areas include Race Timing, the Starter’s Gantry and Medical. The P.A. People network control and monitoring of all UPSs on-site, and provide data logs of their operation to the Formula 1® Australian Grand Prix after the race.

All press conferences and media activities are carried out in the Main Compound in several separate spaces. The building is permanently wired with 100v Line speaker cabling to built-in ceiling speakers and constant voltage control lines, all patched directly to The P.A. People Operations Room. Feeds to fill speakers in the Formula 1® Australian Grand Prix media room are also permanent, with The P.A. People fitting speakers on arrival.

Press conference monitor signals are sent throughout the building, including to GPTV, media administration and the Formula 1® Australian Grand Prix Journalist Room. Two Australian Grand Prix employed journalists take a feed from all conference spaces and produce an official copy for distribution to news outlets. All media events are recorded to USB for back-up and reference via a Denon unit mounted in each space, with the USBs physically brought to the Australian Grand Prix National Press Officer.

Pit Lane, aside from housing the Formula 1® Australian Grand Prix Teams themselves, hosts the Podium PA, a large-scale system for the ceremonial presentations and National Anthem. Long-throw Bose LT4402 Series 2 cabinets hang from the Main Compound, projecting to the stands on Pit Straight. Supplemented by Bose 9702s are a number of other Bose cabinets mounted under the podium. This PA has its own dedicated Yamaha LS9 digital mixer and SB168-ES remove stage-box which provides the volume and excitement necessary for a big podium presentation.

Despite extensive team radio communications, the entire pit and garage areas are fitted with PA horns throughout for emergency paging and relays. Some medical services are located in this area, making emergency coverage critical. Like the Main Compound above, all wiring is permanent, and The P.A. People fit horns to the existing lines during bump-in. 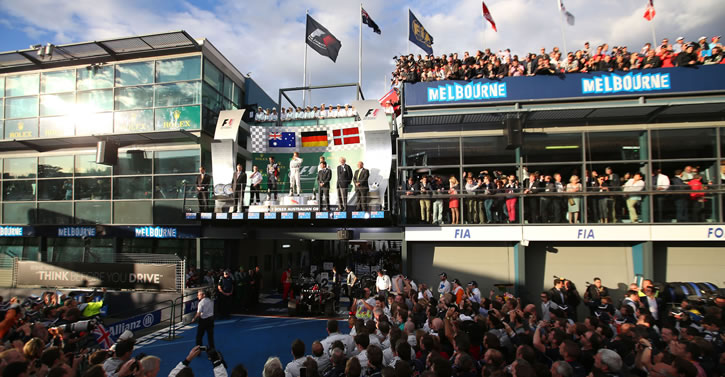 The main race day starts early for the team with full system checks, anthem sound checks and fine tuning of all of the peripheral corporate systems.  All works must take place before the general public arrive en masse.

Throughout the day, the P.A People team operate and manage all systems and additionally roam the site to ensure all systems remain functional and are meeting the needs of the tens of thousands of race fans in attendance on the day.

The conclusion of the race signals an immediate start to the pack-down of all the systems. “As roads are re-opened immediately after the race, we need to get in quickly to ensure our speakers and cabling are removed prior to the crash barriers being relocated” reflected Des.

Two thirds of what has taken us three weeks to setup is pulled down in a matter of hours.