The small town of Bermagui lies in the far south of NSW, on the Sapphire Coast. Down a narrow country road just nine kilometres from the town, a stunning natural amphitheatre known as Nature’s Concert Hall hosts the biennial Four Winds Festival, a celebration of classical and world music.

The festival is held over Easter and for the last 21 years has attracted major international and Australian artists. Past festivals have hosted high-calibre ensembles such as The Australian String Quartet, influential composers like Terry Riley and virtuoso soloists including Slava Grigoryan. Commensurate with its award-winning reputation, the last two festivals have been broadcast by ABC Classic FM.

Funded by the NSW Government’s Arts Trade and Investment and the Federal Government’s RDA fund, as well as the generous donations of more than 300 benefactors, the not-for-profit Four Winds Festival is adding a 160 seat Concert Hall to the festival site. Known as the Windsong Pavilion, the hall was designed by architect Clinton Murray and on completion will be the only purpose built indoor recital hall in southeast NSW.

“This is a big leap from a three-day festival to a world-class cultural facility that will support aspiring and practicing musicians in a year round calendar of events. This will provide a home to be able to develop, rehearse and perform. We believe this is unique in the country and we are thrilled it will be a venue for a wide range of art forms. We will be a venue for hire and a presenter of programs”.Four Winds Chair, Sheena Boughen

The Pavilion will be formally launched at 2014’s festival, and is being equipped with state-of-the art technical infrastructure by Sydney’s The P.A. People. Given a brief to equip the facility for use as both a Concert Hall and a community resource, theatre systems consultant Jim Hultquist of consultancy Schuler Shook specified a user-friendly AV system capable of accommodating a wide range of usage and configurations. Brett Steele, Manager – Installed Systems at The P.A. People, oversaw the process of bringing the design to life. The technical solution provided delivers simplicity for the users with the use of some serious intelligence in the background. 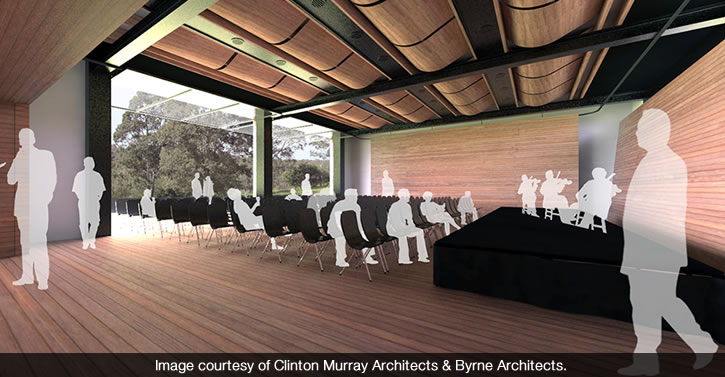 Two JBL PRX512M 12” powered loudspeakers complemented by a PRX 518S subwoofer have been installed as the main Front of House P.A. system, driven from a BSS Blu DSP unit. The Blu has been programmed for both simple, no-operator sound reinforcement as well as connection to a mixing desk’s outputs for larger musical events. Extensive wiring throughout The Pavilion enables equipment to be connected at many physical points, enabling multiple configurations for events. Radio microphones from Shure give the users the flexibility to move throughout the space.

A 3.500 lumen NEC projector has been installed to cover visual requirements, projecting onto a built-in screen. Both the projector and the sound system are controlled by an elegant user interface built with equipment from AMX. “From one of three installed touch screens, any user, regardless of their technical knowledge, can activate both the projector and sound system” said Brett Steele. “The microphones are turned on and mixed automatically, making the space and equipment accessible and useful to the whole community. With another button press, every component of the system shuts down safely.”

“This is an investment in the region. We had to ask ourselves ‘what should we build in a town with 1570 residents that will make it worthwhile to come here?’ Now with $4.5m raised from Four Winds Foundation, Federal & State Governments, pro bono donations and our 300-plus donors, we’re on track to open debt-free, and the equipment The P.A People are installing will help give The Pavilion state-of-the-art capabilities.”Four Winds Chair, Sheena Boughen