Since the 1990s, Sydney’s Darlinghurst Theatre Company have provided a forum for actors, writers and producers to express themselves on the professional stage. Proud champions of independent, sustainable theatre practice, they were chosen by the City of Sydney to be the managing company of the newly established Eternity Playhouse in Darlinghurst.

The Eternity Playhouse is the result of a four-year renovation of the heritage-listed Burton Street Tabernacle by the City of Sydney, a 126 year old Baptist Church, unused for worship since 1996. In consultation with the City of Sydney and architects Tonkin Zulaikha Greer, Darlinghurst Theatre Company has helped transform the building into a unique, state-of-the-art performance space that lovingly emphasises the building’s original features while delivering high-quality technical results.

The Eternity Theatre is named for the chalk street art of Arthur Stace, a Sydney man who, inspired by a sermon in the Tabernacle, wrote the word ‘Eternity’ in copperplate on the streets of Sydney an estimated 500,000 times from the 1930s to 1960s. Some stunning period elements of the building have been kept intact and incorporated into the unconventional design with clever engineering. A steel wire grid of strands only 3mm thick is suspended above the audience, providing a see-through work area strong enough to support technicians and rig lighting, while maintaining a clear view of the ornate wood panelled ceiling.

AV integrators The P.A. People were called upon to supply sound, paging and communications to the project. With their long history of sensitivity to historic buildings and in-depth experience in theatre technology, Darlinghurst Theatre Company Associate Producer and Production Manager Liz Jenkins was happy to have them on the job.

“We initially approached The P.A. People with our installation as they were already familiar with the Eternity Playhouse project. Their competitive quote and attention to detail secured the partnership. They were very considerate of the purpose of the venue and the versatility the sound design required.”Associate Producer and Production Manager Liz Jenkins – Darlinghurst Theatre Company 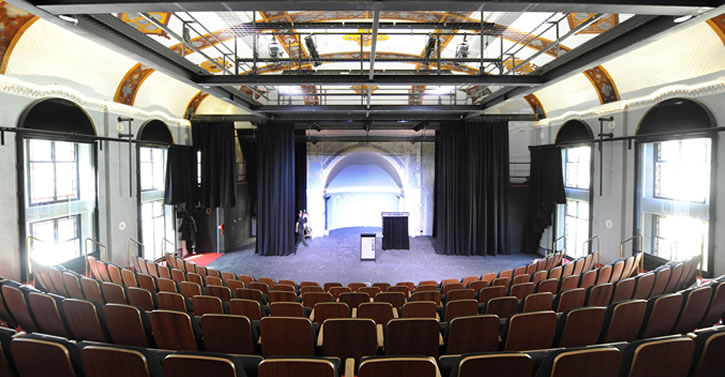 Josh Jones, Project Manager at The P.A People, oversaw an audio design and installation that balances ease-of-use with advanced digital technology and appropriateness of scale. “The PA loudspeakers are JBL VP Series; 12” units for Front of House and 10” for fill. We’ve augmented those with a VP Series 18” subwoofer” said Josh. “The mixing desk is a Soundcraft Si Expression 1, which is an ultra-compact digital mixer that will more than cover the audio requirements of the most demanding shows. Signal is fed to a pair of dbx 220i processors that are automated to maintain the system in perfect condition and keep levels within residential requirements.”

The P.A. People were also responsible for critical paging, stage management, performance relay and hearing augmentation infrastructure. Working as the Tabernacle was renovated, Josh and his team ran cabling linking the foyer to the performance spaces and lighting and sound control to stage. New video cabling supports a performance relay system linked to multiple monitors throughout the venue for reference by stage management, back-of-house and foyer staff. 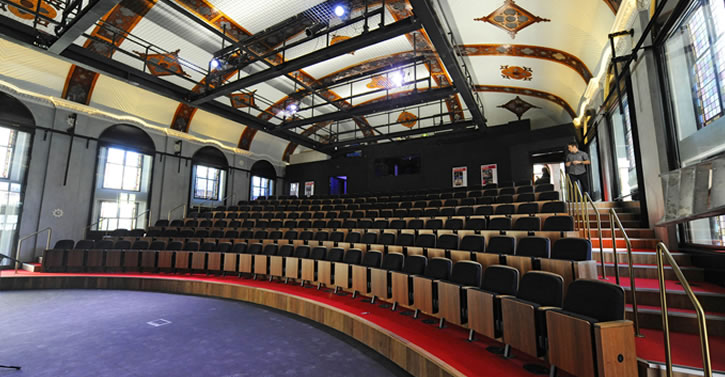 The Eternity Playhouse’s first full production was in November 2013, after Darlinghurst Theatre Company had relocated from the Potts Point base that had served them for the last 12 years. Arthur Miller’s “All My Sons” was chosen for the debut, and went on to pick up four nominations at the Sydney Theatre Awards. “Darlinghurst Theatre Company will continue to present outstanding theatre by local artists” stated Liz proudly. “We plan to expand our audience in the Darlinghurst area and greater Sydney and establish a strong relationship with the community.”