After shutting for renovations in 2011, southern Sydney’s Rockdale Town Hall re-opened with a gala concert late November 2013. The Rockdale Opera Company, who have called the Town Hall home since the late 1940s, graced the stage with long-time resident companies Rockdale Musical Society and the Regals Musical Society. The auditorium’s beautiful Art Deco detailing has been lovingly restored, and is now complemented sympathetically by a new PA and communications system from The P.A. People.

“Rockdale City Council is keen for the Town Hall to be available for a wide range of community groups, including the three musical societies that have been associated with it for much of its life. The newly re-opened building now has all of the modern features and services that are expected, and has retained its original 1940s architectural style.” Senior Events Officer at Rockdale City Council

Brett Steele, Manager – Installed Systems at The P.A. People, carefully managed the Rockdale project to balance the needs of a modern multi-function auditorium with its historical and architectural value. Cabling was run as the renovation team opened up the floors and roof spaces, building infrastructure to serve modern needs without disturbing a classic look.

Heard but not Seen

To minimise visual impact, Brett chose a powerful yet unobtrusive PA system for the auditorium. “We installed a JBL VRX Line Array system in a Left/Centre/Right configuration” explained Brett. “This ensures maximum coverage and caters to the widest range of applications – from musical theatre to simple speeches. Control of the PA is by a skilled technician operating a Soundcraft Si Expression 1 digital mixing desk. Rockdale Town Hall has to accommodate a wide variety of uses and users” Brett continued, “and we needed to provide a technical solution appropriate to both.” 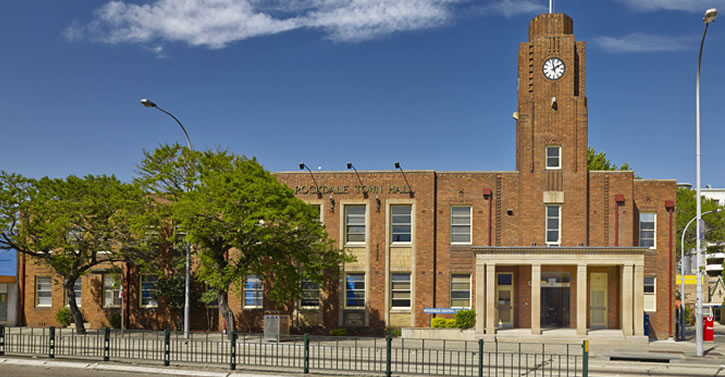 The P.A. People experience in backstage communications came to the fore with a custom design for the new stage management system “We built our own custom cabinetry, and developed a paging system based around AMX controllers” Brett related. “We built-in clocks and other tools for the stage manager to use. Communications are through a headset that plugs in to the console, and we integrated a gooseneck microphone connected to a Jands talkback system.”

In addition to PA and stage management, The P.A. People also carried out works installing Front and Back of House paging systems, video monitors for performance relay feeds and hearing augmentation equipment. “The P.A. People undertook the work in a friendly and professional manner” reported Justin Sheining.“The new infrastructure provides a flexible base for lighting and sound systems as well as the Front and Back of House communications systems needed to operate a theatre.”

The reopening concert was the proof of the work of The P.A. People, with a warm reception from both the crowd and the community groups so grateful to be back in their spiritual home. “The Rockdale Town Hall reopening concert proved the sound system, specifically designed for this unique 1940s Art Deco auditorium, has the dynamic range to cater for any type of performance from opera to basic public speaking” endorsed Justin. “It complements and supplements the existing natural excellent acoustics of the Hall. Rockdale City Council is very happy with the end result.”