The Glasshouse is the flagship performing arts, conference and entertainment centre in regional NSW, located in the thriving CBD hub of picturesque Port Macquarie, on the mid north coast of NSW.

Designed by Tonkin Zulaikha Greer Architects, Glasshouse is an architecturally striking glass construction comprising of a 600-seat performing arts theatre, a 600m2 Regional Art Gallery, a studio theatre, conference facilities and a community workshop. The project brief was to establish the Glasshouse as the pre-eminent performance and exhibition arts facility in the region.

Opened in July 2009, this $50 million centre is at the cutting edge of environmental design and technical excellence. The centre is specifically designed to reduce reliance on non-renewable energy sources and aims to set regional benchmarks in sustainable design whilst boasting the region’s most modern set of technical and production infrastructure and highest level of patron comfort.

The auditorium is a semi-traditional proscenium horseshoe, with a fully equipped lyric stage and fly tower. Operable acoustic drapes and Jands VAB 6 Acoustic Curtains enable the space to be tuned for both voice and music performance. The orchestra pit is operated via direct acting Serapid Link Lift 80 rigid chain actuators to allow a thrust stage, orchestra pit or an additional 40 seats for the audience. The sightlines have been computer modeled, and the sound performance designed to exacting standards. The venue has fibre-optic and Ethernet backbone cabling with audio-visual support provided in-house by Jands who were the head staging contractor for this project.  Jands appointed The P.A. People to draw up plans for the sound system design and to undertake systems integration for the venue. The project works for the Glasshouse included the commissioning, design, and installation of the stage lighting, DMX distribution, patch panels, dimmers and controls, stage manager’s systems including CCTV and paging, stage luminaires, the theatre audio system and studio lighting controls. 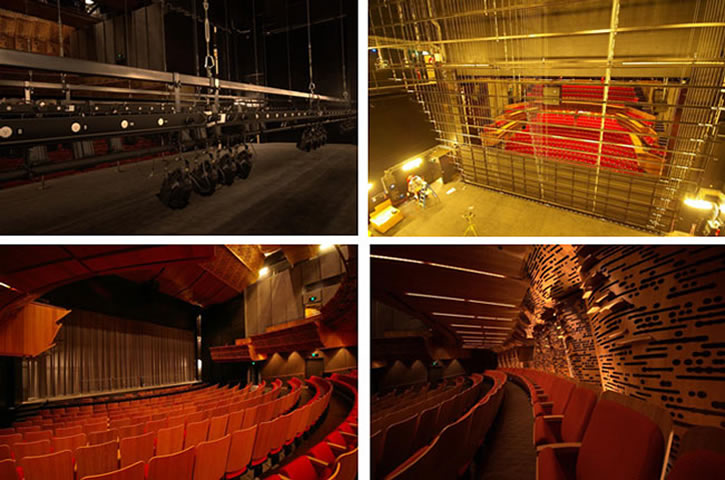 Wrapped around the sculpted form of the tall auditorium, the foyers are open and glassy, and are naturally ventilated. Shaped voids and overhangs are created to facilitate street shade, airflow and an exciting architectural journey from street to auditorium. These impressive foyer areas utilize a JBL Control speaker system of 24CTM and 26CT ceiling speakers together with Control 328, Control 30 and 25AV cabinets, all powered by Crown amplifiers.

”With all the glass and open areas and different sound sources we had to spend a fair bit of time commissioning the system,” said Brett Steele. “The Control 328s, which are high powered ceiling speakers, especially sound nice in the 6m high space.”

For the theatre’s main PA a JBL VRX loudspeaker system was chosen and configured as a L-C-R system in three drops of four VRX932LA cabinets finished in black, augmented by two double 18-inch ASB6128 sub bass loudspeakers, which are flown behind the centre cluster. Three JBL Control 28T60 loudspeakers make up the front fill component located in the front edge of the stage, all of which are powered by six Crown CTs3000 amplifiers. Four JBL PRX512M 500W powered monitors are also utilised.

”The JBL VRX system was a good, price-effective option to cover the theatre’s needs,” added Brett. “Since installation I’ve received good reports on the VRX from the theatre staff.”

Digital signal processing has been entrusted to a BSS Blu80 processor with eight inputs and eight outputs. This can be configured via a Blu10 control panel in the control room, negating the need for theatre technicians to walk to the amplifier room on level 4.

”The Blu10 gives the theatre staff a nice and easy interface to turn the system on and off and to select the various system configuration presets,” remarked Brett.

The FOH and monitoring speaker systems are mixed on a Soundcraft GB8 40ch console, which is also served by a Lexicon MPX-1 effects engine and Marantz CDR 510 CD recorder.

The microphone inventory including Shure Beta 58 and KSM27 wired models and a UHF-R wireless system complete with lapel and hand held microphone transmitters.

A ClearCom Encore MS702 partyline master station was provided for all the theatre’s internal communications needs. This is located in the SMD, but is cabled to the system via the SMD umbilical and patched into the control room. The intercom outstations are equipped with an inventory comprising a total of eight ClearCom RS601 partyline beltpack’s and four KB701 speaker stations.
”It’s a straightforward two-channel comms system with lots of patchable spurs to give the venue flexibility,” said Brett.

A three universe DMX backbone infrastructure is distributed over ten spurs and four custom DMX inlet plates together with central patching, including three Jands DD8s in the control room racks. The P.A. People were also responsible for the IT infrastructure including 65 data tie lines over 38 outlet plates, with central patching across three RJ45 patch bays. The level 4 dimmer room includes thirteen Jands HPX-12SC and six HP-6HRC customised dimmer racks, all fitted with special high rise time filters, for which each rack has been supplied with a separate rack mounted transition panel to present the dimmed outlets in a format compatible with the patch panels installed.

An ETC Ion lighting control console with 1024 patchable outputs and an LCD monitor is backed up by a system infrastructure which includes Jands SB series back boxes and panels in high traffic areas and Clipsal 2000 series plates in the FOH and other BOH areas.