A $3 million sound system upgrade to Sydney’s ANZ Stadium gives concert-sound quality to the 83,500-capacity venue, setting a new standard for stadium sound in Australia and matching the best in the world. The multipurpose stadium was purpose built for the 2000 Summer Olympics and now hosts professional sporting events as well as being the first choice for global entertainment acts including U2, The Rolling Stones, Andre Rieu and AC/DC.

“Our knowledge of the Ground, developed over nearly 19 years, places us in a unique position to understand the requirements of a system, the wide range of events it needs to serve and the Stadium’s expectation of that delivery for their clients and audiences. Having delivered three systems since the stadium was built, and having engaged with every major event over that period – as well as servicing the entire system since its installation, we get that ‘expectation’ and responsibility – in spades”. Chris Dodds, Managing Director, The P.A. People

The most recent system doubles the number of speaker boxes to 374 suspended in clusters.

The system was installed by Sydney-based contractors The P.A. People, who have a long-standing relationship with the venue. The company designed and installed the original sound system in 1999 for the 2000 Olympics, undertook the system’s conversion in 2003 when the venue was renovated, and has maintained the system with a comprehensive service regime and provided PA system operators (as preferred Event Communications supplier to ANZ Stadium) for every major event since.

When the original system reached the end of its service life, the company was contracted to install the new d&b V system speakers along with the substantial mechanical design and metal fabrication required, and continues to provide the venue with an ongoing service and operational commitment.

The system is based around the Stadium geometry with loudspeaker clusters suspended up to 45 metres high in the four quadrants, each served by its own amplifier room. Each of the quadrants was installed in a single week, to enable the entire PA to be fully operational for weekend club matches. The four-way stereo design comprises 266 full-range line-array loudspeaker elements, 44 full-range loudspeakers and 64 sub-bass cabinets.

The P.A. People are specialist contractors in the areas of sound reinforcement, AV systems, performance lighting and communications. Over its 40 year history the company has developed a reputation as a leader in these fields, understanding the rigours of working in a design construct environment and working with other trades and services to ensure delivery of a fully integrated package.

The system was designed by Scott Willsallen of Auditoria, with d&b components supplied by National Audio Systems, and new hoists by Jands Theatre Projects.

Converting 4 tonnes of steel into 20 cluster and bracket designs!

One of the main design tasks for the new sound system at ANZ Stadium was the conception and design of the flying frames and brackets for the d&b loudspeaker hardware. While d&b provided 3D models of each of the speaker cluster elements, it fell to The P.A. People’s engineering design and fabrication team to craft each of the clusters in such a way that they could be supported from just two points each under the catwalks at the Stadium. 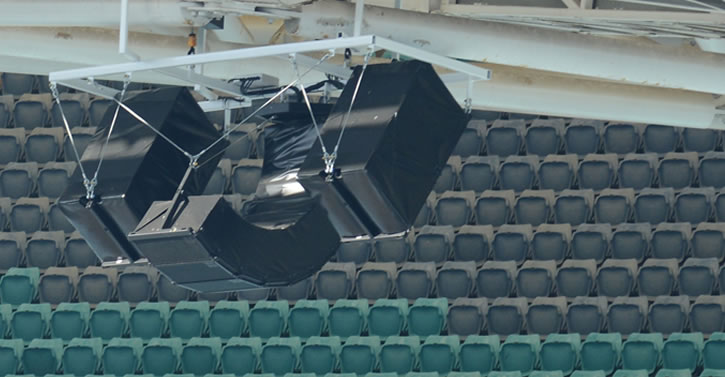 The design process was complicated due to the requirement to rotate the main axis of each of the components on the majority of clusters to achieve a radial distribution pattern. Precise geometry and calculation of each of the speaker cluster and frame elements was required in order to maintain the balance of the cluster, with some clusters weighing almost a tonne and measuring almost seven metres in length.

The clusters were fabricated at The P.A. People workshop in Rhodes, Sydney – and then sent out for galvanising and painting before being delivered to site at the beginning of each of the four installation weeks.

In a site the size of ANZ Stadium everything is a long way apart, both horizontally and vertically. The P.A. People used a pair of temporary staging decks under each speaker location to facilitate the removal of the old speakers and reinstallation of each of the new clusters. Once the clusters arrived on site they were driven to the appropriate location and manhandled onto the platforms. From there, the speaker chain hoists were used to assist in assembling the clusters before they were lifted to their final resting place. 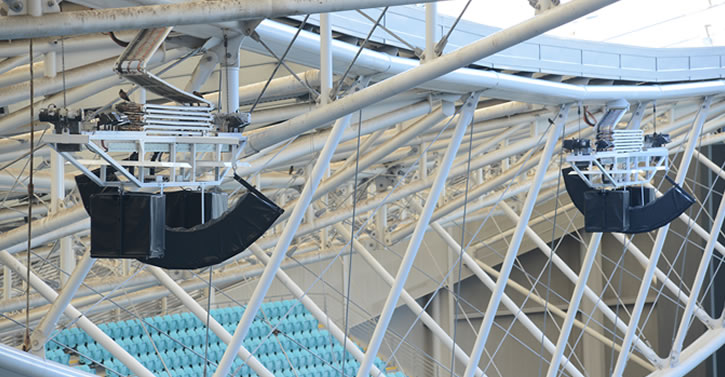 Find out more at: www.anzstadium.com.au