The end of 2006 saw The P.A. People Event Communications Team in Doha, Qatar for what became the largest Ceremonies Communications system ever deployed at that time.

The 2007 Asian Games in Qatar required significantly more radios and key stations for a single site than we have seen for any previous ceremony. A significant aspect of this system was the requirement to integrate 50 radio base stations to our RF multi-coupling system, along with four FM broadcast and eight IEM transmitters.

The system in Khalifa Stadium was typical of the systems now provided for a world class sporting event Ceremony. It consisted of:

As with all our event communications projects, The P.A. People provided an asset management service to manage the distribution of the 1000+ two way radios plus all the associated accessories used for the ceremonies. 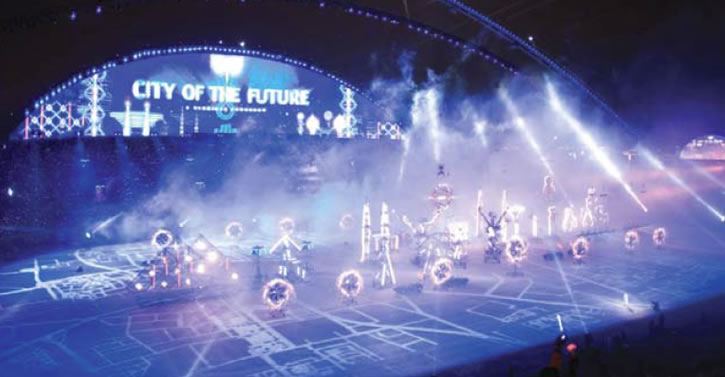 The P.A. People supplied communications and surveillance equipment and support to DAE for the 15th Asian Games Doha 2006. Previously they had provided similar systems to DAE for the Sydney Olympic Games 2000.

For both events they supplied fully integrated systems including wired and wireless communications and, importantly, full support. During an event as technically and physically challenging as the Asian or Olympic Games, it was important that the communications contractor not only supplied the physical equipment but also supplied the staff with experience, expertise and patience to cater to the very specialised needs of a major ceremony. The P.A. People provided a strong match, able to react quickly and calmly to the rapidly changing situations often experienced during the rehearsals and presentation of the Ceremonies.

During the rehearsals and performance of the Doha Ceremonies we experienced extremes in the weather, from extremely high temperatures to heavy rain; the communications system coped with all conditions and the few failures or breakdowns were quickly and efficiently remedied.

In Doha 2006, The P.A. People supplied over 900 radio handsets with almost 100 individual communications channels both duplex and simplex. The Radio communications were integrated seamlessly to the wired matrix communications. The extremely complex communications specification, required to coordinate mass cast, potentially dangerous flying and pyrotechnics, was delivered despite delays and the remote location of the Games.

The P.A. People also supplied a video surveillance system which allowed the directors, stage managers and technical staff access to over 15 cameras around the stadium. The digital video over IP system allowed vision to be displayed to each user’s requirements. The digital system allowed us to record critical rehearsals for playback and analysis.

The P.A. People formed a crucial part of the team which presented two of the most visually spectacular ceremonies ever produced.

Please feel free to contact me if you require any further information regarding The P.A. People involvement on the ceremonies for the Doha Asian Games 2006.