New sound at the SCG!

Since the mid-nineteenth century, Sydneysiders have used the current site of the Sydney Cricket Ground for sporting contests ranging from rugby to cycling. In 1875, the ground was placed in control of the New South Wales Cricket Association and the dominance of this most genteel of sports was stamped on the site forever. By 1882, the SCG included two grandstands, including the namesake of the current 1980s era Brewongle Stand.

In addition to being the spiritual home of cricket in Australia, the SCG is also the home ground of AFL team The Sydney Swans. Allianz Stadium, right next door, is also managed by the SCG Trust and together, both venues make up the Moore Park sporting precinct, which hosts regular Rugby League and Union fixtures during the year.

“…adding to the need to pair seamlessly with the existing PA system within the Precinct, The P.A. People worked with us to achieve an excellent outcome…”.Greg DeAndrade, Project Manager for the Design and Construction Electrical Contractor – Barnwell Cambridge

When the SCG Trust recently rebuilt The MA Noble, Don Bradman and Dally Messenger Stands to meet the needs of the 21st century sporting community, Sydney’s The P.A. People were brought in to not only install new Front and Back of House PA equipment, but also integrate the new stands with the existing facilities. After a 12 month build, the new stand’s AV fit-out was completed in August 2014, with a huge range of new and innovative features throughout. 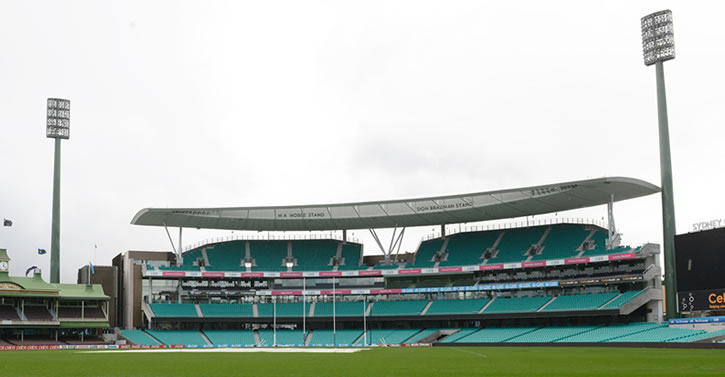 The new MA Noble, Don Bradman and Dally Messenger Stands host a huge range of multifunction and hospitality spaces including a micro-brewery, 14 bars, banquet hall, dining room and corporate entertainment suites. The operational side includes extensive new outside broadcast and media facilities as well as multimedia-enabled coaching and training rooms.

Designed and built by The P.A. People, the new stand’s bowl sound system consists of eight main clusters of JBL AE Series loudspeakers, augmented with delays where necessary, and powered by Crown CTs Series power amplifiers. The PA mix positon remains in level seven of the Brewongle stand, where system processing is through a BSS Blu DSP unit. The P.A. People expanded the existing processor’s tasks, adding new control pages to the PC interface used for overall control of the system. Additional BSS Blu units were added to process audio in the new stand’s FOH and BOH areas.

Significant new network capability was a core goal of the new build. A fibre optic network was deployed in the new stands, with links back to the Brewongle stand. All in all, 95 spaces in the Noble, Bradman and Messenger stands are fully wired into the network. With the existing processing and amplification infrastructure already using CobraNet, The P.A. People seamlessly connected new processors and amplifiers to the existing network over the fibre. Just to be sure, a back-up copper feed was run between the stands.

The SCG’s combination of heritage buildings and state-of-the-art facilities requires care and attention when integrating the old with the new. The new stand’s PA system had to be set-up so that it matched the existing systems tonally and created a seamless listening experience for the crowd. “The new stands are taller” explained Josh Jones, Project Manager at The P.A. People, “so we had to realign our delays across the stadium. The new stands have become the PA’s zero point. The other stands have had their delays time aligned to suit. You can now walk from one stand to another and not notice any anomalies due to the height differences of the speakers in relation to the seats.”

Aesthetics were also a major consideration. Not wanting any unsightly loudspeakers impeding the view, the stand’s rooves were cleverly designed to incorporate the PA clusters in a series of recesses. “We had to co-ordinate with the builder and hang the PA clusters up into their niches” continued Josh. “Our aim was to make the speakers look like part of the roof”. Josh and The P.A. People managed to do this without compromising on one of their guiding principles; that a PA must not only sound good, but be practical and easily serviceable. To this end, they incorporated a simple system for maintenance. “The roof is built in such a way that you can access the inside via a series of catwalks.” Josh elaborated. “So we devised a mounting system for the PA clusters that makes servicing the PA as simple as unplugging the speaker cable connector, loosening off the mounting bracket, and then lowering the cluster using a pair of hoists.”

The practical theme of ‘Fit for Purpose’ continues throughout the BOH areas. Simple AMX touchscreen control throughout the functions and training areas ensure that any user can easily and simply switch audio sources from local to the main PA feed and control volume in their area. The PA systems in the multi-purpose dining and banquet rooms are designed to accept both simple control of playback and volume by in-house staff, or accommodate full-scale third-party production equipment brought in for major events.

The P.A. People task required flexibility of being able to complete a high-end PA system to the facility during staged handovers and required changes to suit the developing structure during construction phases, whilst maintaining the patrons expected sound levels.

Greg DeAndrade, Project Manager for the Design and Construction Electrical Contractor – Barnwell Cambridge said; “The uniqueness of the new Stand provided some challenges for audio services. The solution for the main external seating areas and also within the five floors of the complex, had to meet functional, acoustic, aesthetic and performance requirements, unique to the building’s design characteristics. With these challenges adding to the need to pair seamlessly with the existing PA system within the Precinct, The P.A. People worked with us to achieve an excellent outcome, which has seen the 2014 football season completed and now stands ready for a summer of cricket events”.