For years, simple and reliable full-duplex wireless communications has been somewhat of a holy grail for Intercom manufacturers. So, what is ‘full duplex’ I hear you ask? Full-duplex intercom refers to an intercom system that has the capability to talk and listen at the same time, just like a telephone. No need to talk, then pause whilst the other party responds – and no chance that some of the communication might get lost if someone talks over you.

In the past, the only way to achieve fullduplex comms was to use two frequencies – one for ‘talk’ and one for ‘listen’. In a multi beltpac / multi user system that would become difficult very quickly, as each user would need a separate frequency to talk back; a twenty-user system would require at least twenty-one channels, which in a crowded RF spectrum becomes impractical. These types of systems and topology formed the basis of the iconic BTR wireless system from Telex and explained why it was generally limited to a few beltpacs – and required coordination with TV stations, Radio Mics, and In-Ear Monitoring systems.

So as someone immortal probably once said, there had to be a better way. Back in the early 2000’s a group of intercom engineers in the UK began experimenting with a technology called DECT to see if they could improve on the current state of play in wireless intercom. DECT had its basis in the wireless telephone space and forms the basis of many domestic and commercial PABX wireless solutions. Back in the early days DECT was limited to telephone quality and solutions had to be found to use multiple ‘time slots’ to achieve intercom quality; but the team succeeded and the first generation of FreeSpeak was born. It was expensive and far from perfect, but it showed that there was another way.

Fast-forward a few years. After Clear-Com joined the HME family back in 2010, there was a mood to reinvigorate the FreeSpeak concept.

In 2014, Clear-Com released the FreeSpeak II. A completely redesigned beltpack, along with a new antenna transceiver, was released. The industry acceptance was significant and shortly after the products release, The P.A. People was awarded the communications contract for the Inaugural European Games in Baku, Azerbaijan in 2015. The production crew did not include full-duplex on the original specification, but as the artistic component of the event developed, and after we had been appointed as contractor, it was determined that a full-duplex solution would constitute a significant advantage for the Ceremonies.

The P.A. People turned to FreeSpeak II as its solution. Over 80 packs were deployed with twenty antennas and the system worked flawlessly.

Fast-forward again. The Olympic Games are widely regarded as the pinnacle of competitive sporting competition. What many may not know is that the demands on athletes are replicated by the demands on the technical systems that support them. In 2018, for the first time the Committee of the Pyeong Chang Winter Olympic Games decided that it was time to upgrade the venue sports presentation and results intercom systems, from a traditional two-way radio solution to a full-duplex system. Again, The P.A. People was on hand to provide a solution based on the Clear-Com FreeSpeak II system. At fifteen Winter Olympic venues, we deployed 400 FreeSpeak II beltpacks, over 100 antennas and 30 splitters as a mixture of systems integrated within a Matrix frame and stand-alone FreeSpeak II Bases. That’s a lot of FreeSpeak II at one event.

Recently, FreeSpeak has received another upgrade, which has significantly improved its performance and flexibility yet again. In response to a growing requirement for networked solutions, Clear-Com have released a fully networked antenna solution for FreeSpeak II. The upgrade consists of a new AES67 card for the Eclipse range of Matrix Intercom frames and a new IP antenna transceiver allowing the IP system to run up to 10 beltpacks per antenna. Extensively tested by DORNA, the organisation behind the Moto GP competition, the new IP solution has found wide acceptance in the twelve months since its release.

FreeSpeak II can now operate with either the original antennas and splitters or with the new IP based antennas. Beltpacks can be user-configured to work with either infrastructure.

Freespeak II provides the best of both worlds. It is the original DECT based full-duplex system and is still the market leader. You can use it either fully integrated with a matrix, OR stand alone with a base; it has traditional antennas and splitters (simple to use and no network required) OR it has IP antennas with 10 devices per antenna and works on a network; it is scalable – you can use a few packs or a hundred; it is the Industry standard with literally thousands and thousands of systems deployed worldwide

FreeSpeak II just works. From the largest theatrical productions to sports presentation to corporate events, it is available for hire from The PA People either as part of a full comms system package, as a standalone system to integrate with your kit, or simply some extra packs or antennas for your own FreeSpeak II system.

Central to the opening ceremony was the giant revolving stage set in the centre of the ground. At different times, it was called on to hold hundreds of performers, rotate to display complicated scenery, emulate the birth of a mountain range with hydraulics, and have both water and fire emerge from it. Its first big moment in the ceremony was a section called ‘Miniatures’, in which 300 performers and 200 trap doors were utilised to create a revolving panorama of recreated illustrations from the works of Azerbaijani national poet Nizami Ganjavi, a 12th century writer and philosopher famous for works such as ‘Layla and Majnun’, a story of star-crossed lovers said to have been the inspiration for ‘Romeo and Juliet’.

Bringing just this one scene to life took 26 stage management staff working in unison on the stage, all on full duplex wireless comms, with a further 54 full duplex wireless comms packs and around 25 wired packs under the stage as its own separate system. The comms system as whole was vast; over 1000 two way-radios, more than 200 IP-enabled intercom panels, and hundreds of beltpacks. It was one of the largest communications systems ever used in a live event. The biggest technical challenge was how to make 80 full-duplex wireless comms packs work in the same place. “It had never been done before on that scale,” said Nick Eltis, Senior Technical Director for the ceremonies for creative and production firm FiveCurrents. “We have often tried to do big full duplex wireless systems and it has literally never worked, as the technology hadn’t been reliable enough.” 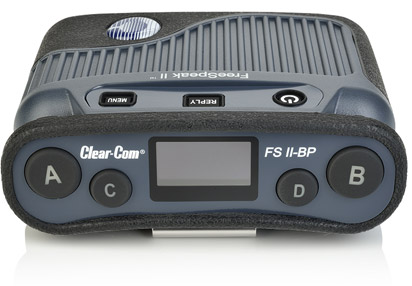 The P.A. People solved this technical difficulty by using Clear-Com’s new FreeSpeak II DECT wireless technology. DECT functions in the globally license-free 1.880 to 1.933GHz range. “The production crew did not include full duplex on the original specification,” recalled The P.A. People’s Managing Director Chris Dodds, “but as the artistic component of the event developed, and after we had been appointed as contractor, it was determined that a full duplex solution would constitute a significant advantage for the Ceremonies.”

“The FreeSpeak II system was flawless,” commented Nick Eltis. “It was literally perfect. There were 26 different talk groups and a global talk group for the stage management team and tech crew running the scenery on the revolve, and it was perfect.” Fritha Truscott, the games’ Associate Show Producer -Show Control, for FiveCurrents, was in charge of the team under the stage. “I had a staff of more than 65,” she explained. “A fifth were local stage management and 18 were employed just for the opening ceremony as the ‘block captains’ on the revolve for the ‘Miniatures’ section. The comms we had on the revolve were extraordinary. I have never been on such clear-sounding comms. I had all these locals out there, that had never done anything like this before, doing their own mini show-call on each section of the revolve, and I was able to communicate with them clearly. It was awesome.”