2006 and yet another busy year for The P.A. People – Kicking the year off was the 18th Commonwealth Games held in Melbourne Australia. With control systems spread across three venues around the city this was more than your typical stadium job. It also saw the first outing for the eyeCUE system, raising the bar for precinct-wide visual monitoring.

2006 brought yet another challenge for the Events Communications Team from The P.A. People. The staging of the 2006 18th Commonwealth Games Opening Ceremony required the integration of three main equipment and control sites:

The system in the MCG was typical of the systems now provided for a world class sporting event Ceremony. 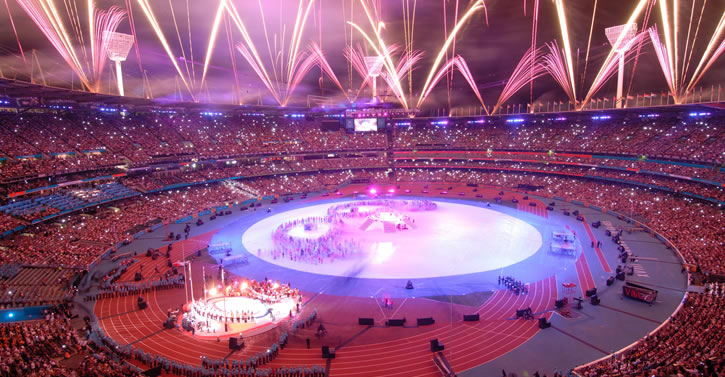 As with all our event communications projects, The P.A. People provided a comprehensive asset management service to manage the distribution of the 1,000 two-way radios plus all the associated accessories used for the Ceremonies.

The challenge lay in integrating the MCG system with a second complete matrix system at the Yarra River, then adding a third major control position using a redundant pair of Free Space Optical links to carry audio for eight channels of base radio communications, audio and data for two remote key stations and two video feeds between the two sites.

The main Yarra River control position and the MCG were linked by 1500m of eight core single mode tactical fibre optic cable deployed by The P.A. People as part of the communications contract. The River system itself was not insignificant.

In my experience The P.A. People are amongst the most experienced and capable technical services companies worldwide. The P.A. People specialises in Ceremonies – The P.A. People people know ceremonies and have the track record to deliver every time. Their expertise covers all areas of communications system delivery:

At every stage of a project I have found Chris Dodds and The P.A. People to be professional, ethical and highly competent. Over many projects, over many they have delivered on time, on budget and above expectation every time.

I am available at any time to personally discuss working with The P.A. People so please do not hesitate to be in touch.