The P.A. People is the world’s only independent supplier of large scale event communications systems and equipment

The P.A. People is the world’s only independent supplier of large scale event communications systems and equipment. In Australia, we work with leading stadiums and sporting bodies in venue partnerships and with major city, regional and local events, to provide presentation support and technical expertise to enhance their patron experience. We also engage with a range of events – sporting, music, civic, celebration and cultural activities – some examples include: Sydney New Year’s Eve, City to Surf, the Royal Easter Show, State of Origin Sydney games, The Formula 1® Australian Grand Prix and St Kilda Festival in Melbourne.

We have alliance relationships with innovative and dynamic communications companies internationally, allowing us to select the best equipment for each task; this allows our team to bring the right solution to each challenge, regardless of the complexity.

The P.A. People developed its first integrated communications system more than 20 years ago and has since developed and refined the most flexible and integrated wireless and wired-events systems available world-wide. The P.A. People was selected to provide communications for successive Summer Olympic and Paralympic Ceremonies in Sydney in 2000 as well as the sports presentation communications for most of the Olympic venues. We have successfully provided similar systems for the 2004 Summer Olympic and Paralympic Games in Athens, the 2006 Commonwealth Games in Melbourne, 2006 Asian Games in Doha Qatar and the 2010 Winter Olympics in Vancouver. In 2012 we provided communications systems to 30 sporting venues for the London Olympics. In 2015, the Company was involved in the 24th Men’s Handball World Championships in Qatar, the inaugural European Olympics in Baku, Azerbaijan and the UAE National Day ceremonies in Abu Dhabi in 2015 & 2016. 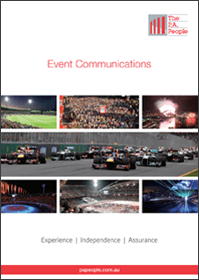 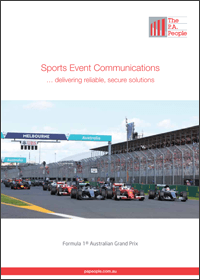 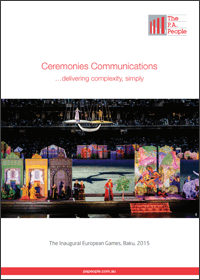 The P.A. People constantly evaluates and invests in the latest technology and our inventory includes: 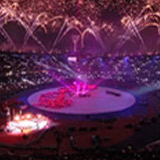 “You have to have a company that has the technology and the experience to be able to guarantee delivery, that understands what you’re trying to achieve from a creative point of view and from an operational point of view -and The P.A. People is that”. 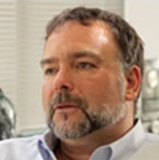 “The P.A. People are a very technically sophisticated group of users; and we stand behind them with our technical expertise and support” 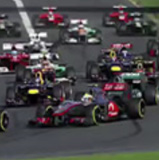 “With The Formula 1 Australian Grand Prix there are no second chances it has to run perfectly, The P.A. People know our event and deliver every time”. 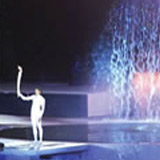 “Since the Sydney 2000 Olympics, we’ve literally travelled the world together. They’re consummate professionals who’ll tum up with the right equipment and the right attitude. They put the right staff on the job – they have an astounding amount of knowledge about their equipment and the environment they work in”.